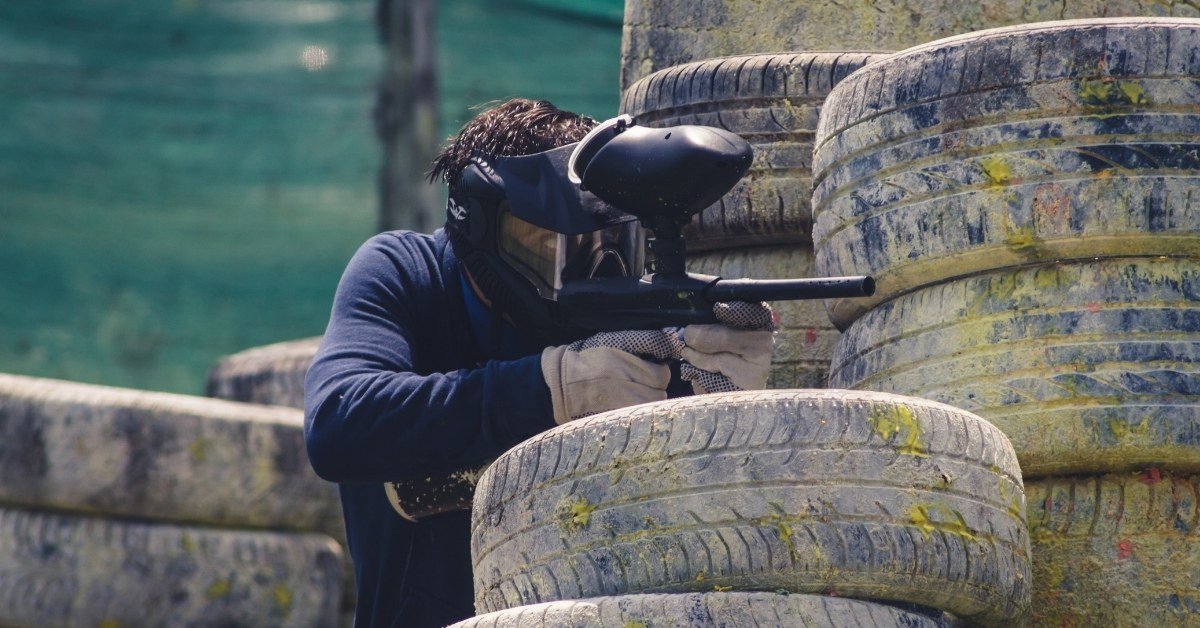 In various game modes, players aim to eliminate the other team by shooting them with spherical paint-filled gelatin capsules that burst on impact.

Sounds like fun, right? While it can be extremely enjoyable, there is a catch. It hurts! Paintball requires a lot of protective gear, and even then, it does not guarantee a pain-free experience.

You will most likely leave the paintball field with at least a few bruises and welts. Luckily for you, there are alternatives to this messy and somewhat painful activity.

If you are looking for competitive shooting-type activities as an alternative to paintball, then this article is for you! The good news is, you will be able to do most of these with kids as well!

Let’s get into it.

Airsoft is probably the shooting sport that is the most closely related to paintball. It requires the same type of protective gear, such as face masks, body armor, groin protection, etc., because, like paintball, it can hurt quite a bit.

Airsoft guns shoot plastic pellets at speeds up to 590 feet per second. Getting hit with that on bare skin or even through regular clothing will be painful and possibly even break the skin causing bruises or bleeding.

While airsoft is played relatively the same way, the fields are usually significantly larger. And two teams are trying to eliminate each other, sometimes playing through specific real-life scenarios.

Airsoft is commonly known as one of the best military simulations as the weapons and load-outs mimic real firearms and equipment.

Since the ammo is a lot smaller and lighter than a paintball, you are at a lower risk of leaving the field in pain and covered in welts. But that does not mean airsoft is not dangerous.

In fact, airsoft pellets have been known to pierce the skin and hit bone because of their velocity and size, which is more harmful than the bruises you can get from paintball.

While you are less likely to get a serious injury playing airsoft versus paintball, the complications can be much more severe.

Hopefully, this goes without saying, but like paintball, airsoft is not for kids.

Laser tag is an excellent alternative to paintball that is pain-free, not messy, and for all ages. It is a recreational shooting sport that uses infrared-emitting light instead of some type of bullet.

Players have their infrared-emitting guns and wear a target (infrared signaling device) that registers hits.

There are also signaling devices around the arena that are used depending on the game type being played, like “capture the flag,” for example.

Like paintball, it is a team game with the same general goal: eliminate the other players. Laser tag is most commonly played indoors in a dark arena, usually lit with blacklight lighting to add effect.

You can actually get a pretty cool laser tag home set on Amazon!

Archery tag will provide you with a fun twist to the game of paintball. Unlike other team shooting sports, you are using a “bow and arrow” instead of a gun. But don’t worry, the arrows are tipped with foam, so it is painless.

The same rules as paintball apply, and players can use the same fields. Face protection is required to protect your eyes, but since the arrows are tipped with foam, body armor is unnecessary.

Playing various game modes, teams will try to eliminate each other in straightforward “team deathmatch” games or specific scenario-based games by shooting arrows with a bow.

Archery tag is a more complex game that requires a little more athleticism and coordination.

While this may not be the best option for kids, it is a great, fun alternative to paintball and an excellent choice for those who aren’t that thrilled about guns.

Just make sure you have these foam tips (Amazon link) on!

Nerf or dart tag is another exciting alternative to paintball for those who would rather not get dirty and bruised.

Eye protection is required, but the darts themselves do not hurt much at all—at most, you would feel a slight sting, like a finger flick.

This team sport can give you a similar adrenaline rush to paintball without the fear of being badly injured. Nerf tag is usually fast-paced like a game of speedball would be.

My absolute favorite nerf gun has to be this Amazon exclusive Modulus. Yes, I’m 23, yes, I have a nerf gun.

Mechanically speaking, paintless paintball is probably the closest to the sport of paintball. You are using regular paintball guns, but instead of loading them with paintballs, you are loading them up with 2” foam balls.

Aside from face coverings, this is a fantastic alternative to paintball that doesn’t leave any marks.

You can easily play in shorts and a t-shirt without worrying about injury. It is also great for kids as young as six years old. The same rules as paintball apply.

Reball is paintball without the mess. Instead of using paintballs that burst on impact, it uses rubber balls that don’t explode.

The good news is that, unlike paintball, you get unlimited ammo since the rubber balls are re-useable. The bad news is that it hurts just as much as regular paintball.

That being said, this is not the best option if you are looking for an all-ages activity. Reball is primarily for older kids and adults who just don’t want to get paint everywhere.

Like paintball, the same fields, rules, and protective gear are required for reball.

This last alternative to paintball is probably the most recreational and most inclusive of all options. Chances are you have played this as a kid or with kids.

Everyone has a water gun or “Super Soaker” filled with water, and the goal is to wet the other players or the other team, depending on how you set up the rules.

You can play water gun tag anywhere, but it is usually played outdoors during the summer. There are not any specific rules to this game. The main goal, more than anything, is to cool off and have fun on a hot day.

It might not be the most exciting game compared to paintball, but it can definitely be a ton of fun!

And if you need a recommendation for a good quality water gun, these ones from Amazon rock. Yes, I’m 23, yes, I have water guns.

Don’t fret it if you are not willing to play paintball because of the risk of injury—you are not alone. There are tons of options out there for you that are pain-free, mess-free, and for any age group.

Hopefully, this article helped shed some light on the paintball alternatives that exist. No matter what your requirements are, there is a shooting game for you!