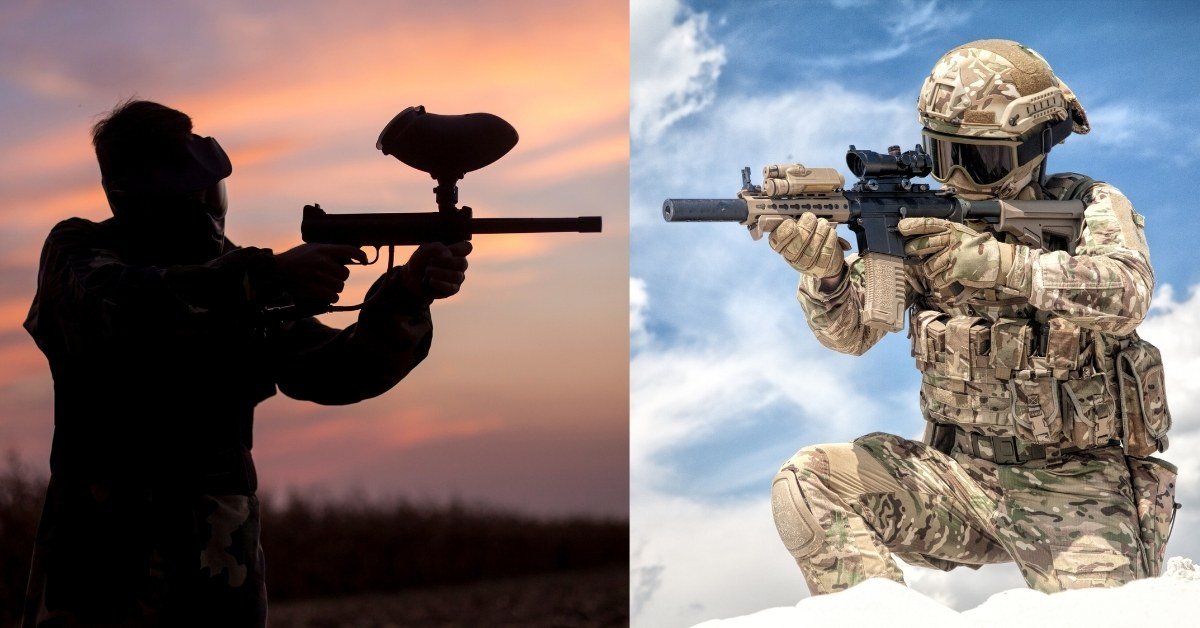 Airsoft and paintball are probably two of the most popular team shooting sports in today’s world. So, as a beginner interested in shooting sports, you will probably look to these two options before anything else.

But which one is right for you? There are several differences and similarities between these two sports, so choosing one to focus on can prove to be a daunting task.

Don’t worry! This article will outline all of the differences, similarities, dangers, costs, and specific details relating to both airsoft and paintball.

After reading this, you will have a much clearer understanding of both sports so that you can make the right decision for yourself.

What Hurts More Airsoft Or Paintball?

Without sugar-coating anything, it comes as no surprise that you can be injured playing either airsoft or paintball—especially without any protective gear. However, believe it or not, paintball is more painful than airsoft, and there are a few reasons why.

The muzzle velocity at which airsoft pellets exit the gun is between 300 and 590 feet per second (FPS) compared to paintballs’ average velocity between 280 and 300 fps.

Due to this weight difference, an airsoft pellet only delivers 1 Joule of energy per shot compared to a paintball that expends about 12.5 Joules.

Since a paintball carries so much more energy per shot, it will most definitely hurt more to get hit with one of these rather than an airsoft pellet.

What About Paintball And Airsoft Injuries

Injuries resulting from airsoft pellets or paintballs vary significantly in severity depending on the protective gear you are wearing, where you are hit, and how far away you are being shot from.

Paintballs can leave nasty bumps and bruises when they make direct contact with your body, and the closer the shot comes from, the worse and more painful the impact will be.

Airsoft pellets are much smaller and can get in small areas between the protective pads you are wearing, leaving minor bruises and sometimes breaking the skin.

While again, they do not hurt as much as paintballs, getting hit in susceptible areas such as lips, ears, fingers, eyes, and groin can be extremely painful and cause a significant amount of damage.

While there are some similarities in airsoft and paintball costs, some important details make paintball ultimately more expensive than airsoft.

First, the cost of protective gear you will need is the same for both airsoft and paintball because the equipment itself is the same.

You will want to protect yourself the same way whether you are playing airsoft or paintball (face mask, body armor, etc.). The gear will cost you roughly $200, depending on how much protection you want and what brands you buy.

(Check out some great paintball masks that don’t fog.)

The cost of entry-level guns is relatively similar for airsoft and paintball, with airsoft guns providing a more comprehensive range.

The field entrance fees are also somewhat similar, but the most significant cost difference comes down to the ammo.

Paintballs are so much more expensive than airsoft pellets (9 to 10 times more expensive!), so while the entrance fees are more or less the same, buying ammo for paintball really hikes up the price.

Before getting into the range comparison, it is essential to note that there is a difference between “maximum range” and “effective range”.

The maximum range is how far the airsoft pellet or paintball will travel before it hits the ground. The effective range is, essentially, the range at which the “bullet” can effectively hit your target.

For this article’s purpose, I will focus solely on the effective range of each gun, which will be the most helpful information for you. Due to the many gun options for airsoft, the range differs depending on which one you are using.

The average effective range for paintball guns is between 80ft and 100ft.

Airsoft pellet accuracy is mainly due to the fact that they are smaller and travel at a higher rate of speed. This, in turn, means they encounter less wind resistance and are ultimately more accurate.

The type of paintball or airsoft pellet, along with gun upgrades, can also increase accuracy.

What Is More Realistic Airsoft Or Paintball?

Airsoft is much more realistic than paintball. We have already discussed that there is a much wider variety of guns available to choose from in airsoft versus paintball.

You can have pistols, assault rifles, and sniper rifles, each with its own accessories to make them look and perform better.

Compared to paintball guns, airsoft guns closely resemble actual firearms, which adds to the realism. You will rarely mistake a paintball gun for a real weapon.

Of course, paintball games can get very intense, but the variety and style of gameplay is no match for that of airsoft.

While paintball is much more structured in terms of rules and gameplay, airsoft playing methods vary greatly from field to field. The field’s size can change, meaning locations/layouts can be very different from one another.

On top of the realistic-looking guns, all these factors really make you feel like you are actually in combat.

Since you do not have to worry about getting paint all over your clothes, you can add yet another level of realism with realistic-looking load-outs, clothing, and even actual combat behavior.

What Is More Popular Airsoft Or Paintball?

The general consensus seems to be that paintball is more popular than airsoft. A huge contributing factor to this is that it is very easy to cheat in airsoft, discouraging many people from playing.

It is easy to tell if you’ve been hit or hit someone else in paintball because of the paint splatter, whereas airsoft relies mainly on the honor system, which means taking yourself out of the game if you get hit.

You can see how the over-competitive/sore loser players can take advantage of this rule quite easily.

Another reason paintball seems to be the more popular of the two sports is that airsoft is often seen as the “cool” or “show-boat” sport, while paintball is more active and high-paced.

Since airsoft has realistic equipment, load-out, weapons, etc., it is said that people play it more for the “look” rather than the activity/sport.

Paintball also has a much larger community and several more tournament/competition options than airsoft.

As previously discussed, this is mainly because it is almost impossible to cheat; there is no hiding if you get hit, and the rules and fields are pretty much standardized wherever you go.

Paintball is generally more organized than airsoft, making it much easier to put on several tournaments with many players.

A great example of the popularity difference is airsoft versus paintball events for the hardcore players. The airsoft tournaments will host up to 300 or so players, while paintball events draft upwards of 5000 players.

Which Is More Dangerous Airsoft Or Paintball?

There is no question that both airsoft and paintball are considered dangerous sports. Getting shot with projectiles traveling upward of 280 FPS is bound to leave a mark.

However, while paintball tends to hurt more often, airsoft would be considered the more dangerous of the two extreme sports.

As previously mentioned, paintballs can leave nasty bruises and welts if you are hit in unprotected areas. However, paintballs are also designed to inflict the least amount of serious damage possible by exploding upon impact.

Airsoft pellets, on the other hand, are made from hard plastic and are much less forgiving. The ammo is far more accurate than paintballs and can sometimes pierce protective materials and skin.

Minor injuries in both these sports depend on where you get hit. Getting a welt from a paintball on your arm would be the usual hit.

Comparably, an airsoft pellet can hit you directly in a soft spot between the mask and your jacket or behind the ear, in which it is very likely to penetrate.

The ankle is another dangerous place to get hit because airsoft pellets have been known to cause some complications when hitting bone.

Airsoft pellets are not designed to minimize damage like paintballs. While paintballs make you vulnerable to more consistent injuries, getting hit in the wrong place with an airsoft pellet can be bad.

In extreme cases (such as getting hit in the eye or mouth), both airsoft and paintball can cause serious complications. So always wear your protective gear.

Which Is More Fun Airsoft Or Paintball?

When trying to figure out which of the two activities you will find more fun, you will find that it is entirely subjective and depends on what you like.

The main difference lies in the style of gameplay. Airsoft is a slower-paced game and involves a lot of group strategy and patience. It requires you to really immerse yourself in the game.

Again, airsoft is the more realistic of the two; as mentioned earlier, weapons, tactics, and gameplay types are meant to mimic real soldiers in battle.

Paintball, on the other hand, is more like a sport. It is fast-paced, tactical, and relies heavily on individual skills. Paintball is more about the game rather than realism.

Think of it as the difference between Counter-Strike (airsoft) and Call Of Duty (paintball).

While paintball and airsoft are both shooting sports, they do have their differences and individual disadvantages.

While paintball may hurt more, airsoft can cause some of the more severe injuries. Airsoft is much slower-paced and strategic, while paintball is much faster and more of a sport/game.

In the end, it comes down to what kind of gameplay you prefer. Knowing all the differences and details of the two sports, deciding which one to play should be a piece of cake!

Good luck, have fun, and most importantly—stay safe!