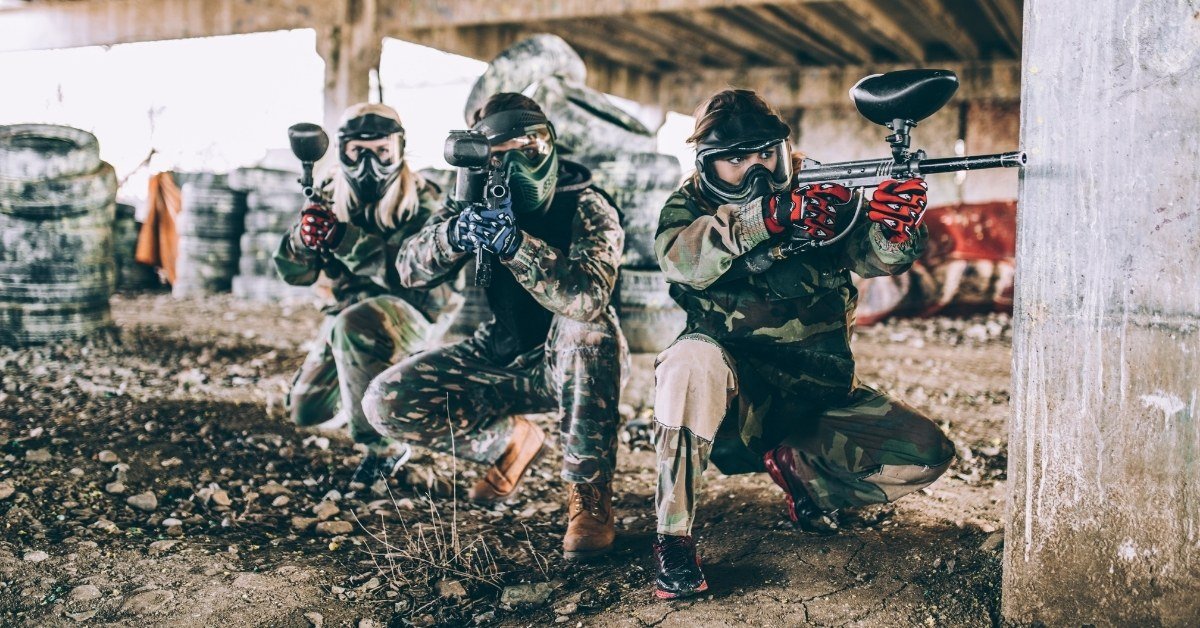 If you’re wondering how to get into paintballing, the answer is simple: it’s fun, do it! But I’ll go into detail. Paintball is a competitive, addictive, and adrenaline-pumping shooting game first played in 1981.

Over the years, there were many changes and advancements. However, the basic game remains the same. The paintball guns (also called paintball markers) shoot balls filled with paint that mark opponents upon impact.

If you like that idea of adrenaline pumping combat with no severe repercussions other than slightly painful bruises, all you need to get into paintball are the following things:

If you get a clear idea about the above three points, you are all set. And this post is aimed to give you a clearer picture of all three of them.

There are a few fundamental pieces of gear that every basic paintball game will need.

Most of them run on CO2/HPA/Nitrogen propulsion, meaning, when you pull the trigger, a small amount of your specific gas will release, propelling the paintball out of the barrel.

Now, there are also electric paintball guns, which are certainly easier to use as they don’t need constant refilling (other than recharging), but they do come with some downsides.

Regardless of which one you prefer, I suggest you rent a paintball gun for at least ten games before purchasing one.

A propulsion tank is an essential piece of paintball gear used to produce the power to propel the ball outside of the gun.

As I briefly explained in the previous part, CO2/HPA/Nitrogen tanks are the most widely used ones. When you pull the trigger, a little bit of whichever gas you choose is released, propelling the paintball out of the barrel.

CO2 is the original version with which paintball started, and it is still widely used. Nitrogen/HPA seem to be better overall but do come with a higher price tag (you can check my comparison here). Regardless, both do the job very well.

Every game has its fun and dangerous aspect, paintball, being a combat game, definitely has that as well. In this game, players shoot each with fairly soft paintballs.

But even though the paintballs are soft, they’re still flying at least at 300FPS (Feet Per Second) and can hurt. Thus, it is always advisable to use appropriate safety gear while playing. Some of the commonly used gear pieces are:

A mask or goggles will protect your face and eyes from getting hit by a paintball.

Other than the fact that a direct hit can cause severe damage to your eye (and even blindness), paintballs also contain some chemicals, so your eyes can get irritated if some of the paint gets into them.

Thus, always wear goggles or a mask (preferably a full mask) while playing, and only remove it when you’re in a safe zone.

Note: if you go for goggles, you will need a face cover of some sort.

Once you are fully equipped with all the paintball gear, you will need, unsurprisingly, paintballs to fire at your opponents. You can purchase paintballs in bulk which is significantly cheaper than small bags each time.

Although, remember that most paintballs expire after 6-8 months, so plan accordingly when you buy a significant amount.

Well-made paintballs are always preferred over cheap ones. Cheap ones will always lack accuracy and range. Also, in some cases, they will even melt or break in your paintball gun, damaging your internals.

Most people who play paintball are playing it as a hobby so they probably don’t need anything else. However, in addition to the above list, there are many extra gear pieces that players purchase nowadays. A few of them are paintball mines, barrels, barrel bags, tank covers, etc.

Learn How To Use The Paintball Gun

Take some extra time to understand the basic functioning of your paintball gun. That way you avoid confusion, mishandling, and misfiring in the middle of the game. Watch some YouTube videos and ask an instructor/experienced player to go over the basics with you.

Once you get used to your marker, you must master your accuracy. You can improve your accuracy by going to a range or setting up targets in your backyard (though, don’t shoot indoors, and make sure your neighbors are ok with you shooting in the backyard).

Getting stuck fumbling to reload in the middle of the game can spoil the momentum, and in many cases, you can get shot in the process.

Practice well how to reload your ammo without taking much time (even time yourself and aim to beat the previous time with every attempt). This is easy to practice as you can just do it in your room a few times a week.

Shooting while running is far more complicated than how Hollywood makes it seem. But a lot of the time, you will need to be running and shooting during a paintball game.

Thus, you need to practice running and shooting. If you have a backyard, you can just do so on the targets.

Learning from experience is the best way to improve your skills. Senior players would have faced similar conditions during their beginning, and they also know the field.

Asking questions or learning from a senior player will save your time and improve your skill far more quickly. It’s also a great chance to socialize in the paintball field, which is part of the fun.

Once you are ready with your paintball gear and basic skills, be confident and start executing some bold new strategy every game. Each time you will learn new things, so don’t be worried about failures.

Find A Good Place To Play

Discuss with your friends or search online to find the best paintball field near you. Visit the field and understand the different modes of play, the staff, the community, and the field itself. Don’t settle.

Play smart by listening to your surroundings, shooting intelligently and accurately, rather than spraying and praying, and bunking down whenever needed.

Communicate With Your Team

Communication between your teammates is crucial. Always discuss the game plan ahead of the game. Practice using hand signals to improve coordination. And even get walkie-talkies to communicate better, especially if it’s a big field.

So, we went over how to get into paintballing. Now it’s up to you! However, if you have any more questions, go to the homepage, and send them to me through the contact form. I’ll be happy to help!